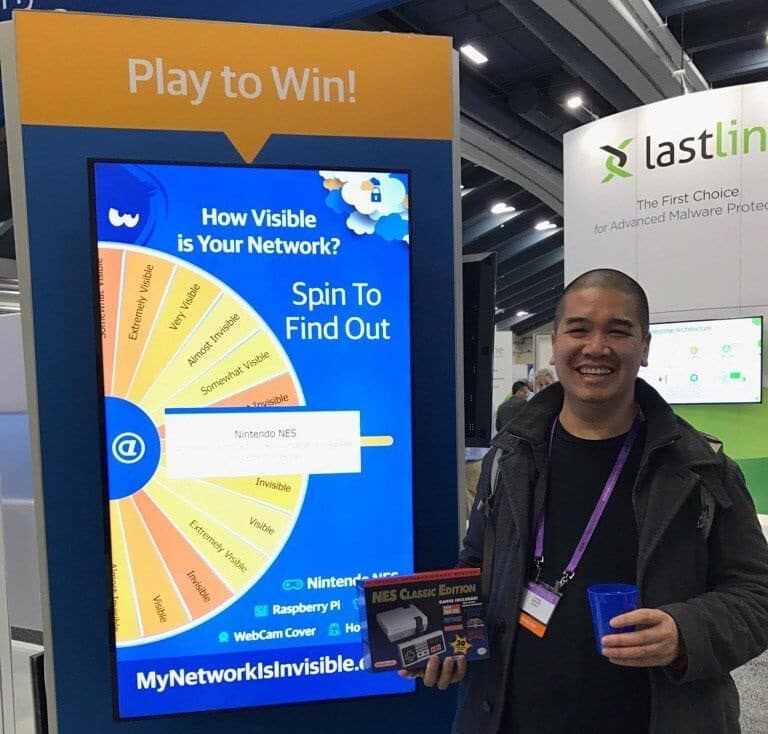 It’s simple: When you as an exhibitor use our Virtual Prize Wheel in your booth, you will get more booth traffic. The intent of this article is to help you prepare your booth staffers to better interact with those visitors, so you get more qualified leads and better overall trade show results.

Your booth staffers can qualify attendees drawn to your booth before, during, and after they play the Virtual Prize Wheel:

Qualify attendees before they play the game

Qualify attendees while they play the game

Even if you offer a big prize of some popular new consumer electronics, the Virtual Prize Wheel can offer multiple prizes at different value levels.  So make those second and third-tier prizes work to qualify attendees. When you prizes include a 20% discount on the next order, or a free sample, or an hour free consulting, your booth staffers can look for people’s reactions and what they say when they win those kinds of prizes.  If they say, “I can use that!” or get excited about winning product or job-related prizes, your staffers have a more qualified prospect, and can then focus on taking that particular prospect further.

Your booth staffers can also check out the badges while attendees are focused on playing the game.  It’s not a good idea to look at someone’s badge when you are talking to them – they will find it rude.  But when they look down to play, your staffers can look to see if anyone playing is from a company they know is a viable prospect, because of its reputation, size, or industry match with your best customers.

Qualify attendees after they play the game

Your booth staffers can also engage the attendees after they’ve spun the wheel, thanking them for playing the game, giving them any prize they did win, and then asking a simple, yet powerful qualifying question such as, “What business problems are you looking to solve while attending this show?” or, “Is there a product you are searching for at this show?” If you have too many game players to engage all of them in depth, your booth staffers can quickly decide which attendees are a good match for their offerings, and proceed further with the better ones.  Catch and release!

Find a qualified lead? Take that lead farther with our Lead Manager App

The Virtual Prize Wheel is set up to have attendees self-enter into the game screen their answers a few short qualifying questions to gauge their interest level, so your sales force has good qualifying info about the game players who visited your booth.

Besides being prepared to take more qualified leads, prep your booth staffers by explaining about the various prizes you are offering: how they should be displayed in the booth if necessary, where the prizes are stored, what to do when someone wins the grand prize, whether you will give them the prizes right there or ship them after the show, how you will handle non-tangible prizes (like a 20% discount) with coupons, and how to describe them to attendees.

Our Virtual Prize Wheel is tech at its best: It attracts more attendees to your booth, and is both great to look at and easy to use. With these booth staffing tips, you’ll be sure to get the maximum value out of using it in your trade show booths.

If you’d like to see more about how you can drive more booth traffic with our interactive trade show games, feel free to contact us with questions or to discuss your event with one of SocialPoint’s Digital Strategists. We’ll help you generate excitement, crowds, and leads.