When you use our interactive trade show games to drive more booth traffic, you will likely also need prizes for your game winners. But what prizes are exhibitors offering now?

To find out, we looked at what booth prizes exhibitors recently promoted via their Twitter account. We found 100 tweets with a trade show prize offering from late 2018 until July 2019, and then categorized the prizes into 7 groups.

We share this survey as an idea-generator for you as you consider what prizes to offer in your own booth.

Here are a few of the 100 tweets with trade show prizes for games and contests that we found: 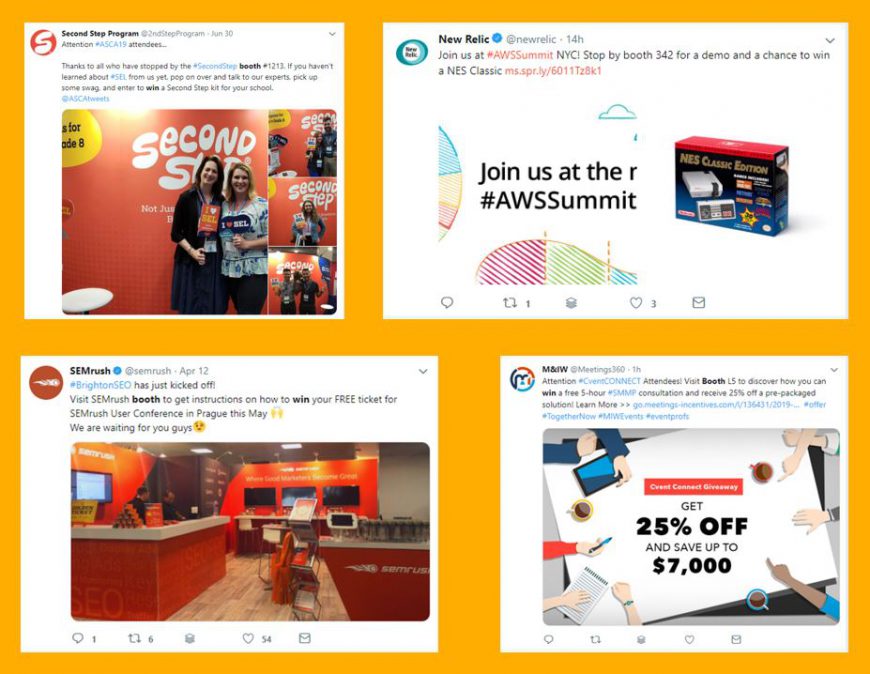 Here are the 7 most common trade show game prize categories, and how they ranked:

Let’s look at each separately, to get even more ideas for your upcoming shows.

Consumer electronics are by far the most popular kind of trade show game prize. Exhibitors entice attendees with offers for fun, expensive gifts attendees may have not yet bought for themselves.  Video game consoles were the biggest sub-group, with 10 exhibitors offering a Nintendo, PlayStation, or Xbox.

Within this category there are naturally shifts over the years.  While no one offered the formerly ever-present Apple iPad in this recent group, 4 exhibitors offered instead Apple Airpods.  Drones also look like they are coming to the end of their peak prize offering time, as there were only 2 in this survey, both in the end of 2018.

The second most common category of prizes were exhibitors’ own products. Which is a great idea: You give away a prize that only attracts qualified prospects for your products.  And their perceived value is higher than your actual costs.

Here are the prizes these exhibitors offered as trade show game or prize wheel prize:

Gift cards were the choice of 8 exhibitors, and 3 went right to cold, hard cash – with the largest single prize being $10,000! Gift cards and cash take little effort to procure and little space in your booth. The most common gift cards were from Amazon.  Here’s what exhibitors offered:

A surprising number of exhibitors took the same path to making their prize sound bigger, by offering anonymous prizes collected together in a “prize pack”, “swag pack”, or similar. This is a good strategy if you have to promote your booth before you’ve actually decided on your prize giveaways!  You can also lump together multiple items that all have your logo imprinted on them.

Exhibitors used this language in their promotional tweets:

While somewhat similar to giving away your own product, these exhibitors gave away other people’s products, but chose items that would matter only to people with the job responsibilities of their buyers.  That way, only people qualified to buy their products would visit their booth, and those qualified buyers would be grateful to them.  (Our interactive trivia game is also good for attendees who like to learn.)

These gifts are very specific to narrow vertical markets. So use the ideas for inspiration, if not the actual prizes!

Shirts can be a great giveaway, because when attendees wear them, they become walking billboards for your brand.  However, your shirt has to be nice enough to avoid getting buried in a drawer.

Chances are, more than 4% of exhibitors are offering a shirt as a prize giveaway, but don’t bother to tweet about it.  However, these exhibitors who did tended to offer something more than the average t-shirt, to get attention and stand out:

Stuffed toys were once very popular as giveaways.  The idea was, guilty parents away from home would stand in line for stuffed toys to give to their kids when they returned from the show. Exhibitors offering them would then get a chance to talk to attendees. That idea may still work, especially at certain vertical market shows.

However, a drawback is that the prize is for the attendees’ kids, not the attendee.  You want your booth visitors to see your branded prizes, not their little children, who, shall we say, lack buying authority.

There were another 12 exhibitors who offered prizes that did not fit neatly into the previous 7 named categories.  These prizes ranged in value from koozies up to a Ducati motorcycle! Some were toys, some were branded with the exhibitor’s logo. All are potential ideas for your own exhibit.

Come visit booth #212 at the AWS Summit in NYC! Play some trivia and win one of our many lego prizes! pic.twitter.com/7ZjuZ7GaIl

Just remember, exhibitors are more likely to tweet about a multi-hundred dollar prize, rather than an 89 cent pen! So, since bigger prizes are mostly what we found in tweets, consider these ideas more for your biggest prizes for trade show games, contests, raffles, and drawings.

Trade show attendees have limited time to walk the trade show floor, so exhibitors need to offer something of value to win their attention over neighboring booths. I hope you found good ideas from our survey of recent exhibitor prizes.  Pick the right prize for your attendees, and you will generate more booth traffic and boost your overall trade show results.

If you’d like to see more about how you can drive more booth traffic, keep attendees engaged longer, and capture leads with our fun interactive trade show games, click here to ask for a product demo. We’ll help you generate a serious increase in excitement, crowds, and leads.